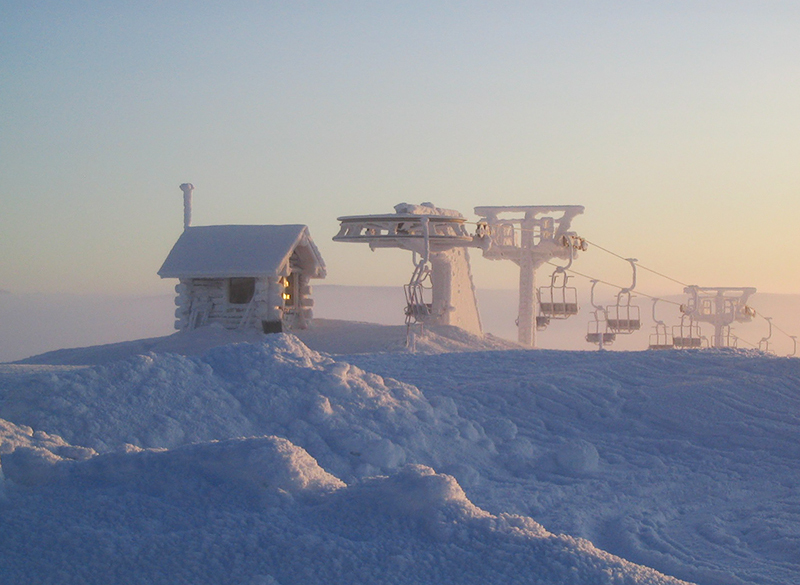 Saariselkä is the northernmost ski resort in Europe with a long skiing season and spectacular sceneries close to the famous Urho Kekkonen National Park. Although Saariselkä is not as famous as Ylläs and Levi, authenticity and the local lappish culture make the resort worth a visit year after year.

Ski Saariselkä is a ski resort in the municipality of Inari, where there are a total of 15 slopes for skiers and snowboarders. Thanks to the 7 illuminated slopes, you can easily ski in the night time - and if you are lucky, even under the northern lights! The two fells of the ski resort, Kaunispää (438 m) and Iisakkipää (415 m) provide enough slopes for everyone. Saariselkä has many easy (blue), medium (red) as well as difficult (black) slopes.

The Saariselkä Skiing map and the Slope Map

Thanks to the versatile range of restaurants and cafes, Saariselkä is a good destination for both fast food lovers and gourmet enthusiasts who are seeking traditional Lappish dishes. During your stay you should definitely taste the local delicacies of the Inari region. In Saariselkä, you can visit some of the atmospheric restaurants, like Huippu in Kaunispää, Fell centre Kiilopää, Laanila Kievari and Restaurant Teerenpesä.

In the Saariselkä, Inari and Ivalo areas, there are a lot of popular events organized every year, gathering visitors even from long distances. In the winter time, Saariselkä is worth visiting during the Kaamosjazz - Polar Night Jazz event. During the festival, you can enjoy top performers' gigs at the beautiful venues. Skábmagovat indigenous film festival, organized in the winter, will feature films and television shows by Sami and other indigenous people. Saariselkä is also home to countless art exhibitions and concerts that offer entertainment all year round.

Thanks to its northern location, the long skiing season is comparable to almost any tourist destination in the world. Here you will really feel the famous "true winter", as the average temperature in January and February drops to minus 15 degrees. The best outdoor time is April, when Saariselkä enjoys the sunshine in a few minus degrees.

Traveling: how to get to Saariselkä?

Although Saariselkä is the northernmost ski resort in the whole Europe, you can easily reach the area by car, bus, train or plane.

By bus: Saariselkä is easily accessible by bus, as there are plenty of connections to the ski resort via Oulu and Rovaniemi. You can even reach Saariselkä by bus from Helsinki-Vantaa Airport.

By train: By train, the nearest railway station is located in Rovaniemi, from where you can continue your journey either by bus or car. There are several train connections between Helsinki and Rovaniemi daily and there is a bus service to the north from the railway station. If you wish, you can also take your car to the train and continue on the 270 km long journey from Rovaniemi to Saariselkä.

By plane: Ivalo Airport can be reached regularly on both Finnair and Norwegian flights. The flight time from Helsinki is only about 1,5 hours.

Getting around in the Saariselkä area: When you arrive in Saariselkä, you can move around the area either by foot, taxi or ski bus. At a daily rate of 5 euros, you can use the ski bus to move between Saariselkä Ski Center, Kiilopää and Saariselkä village.